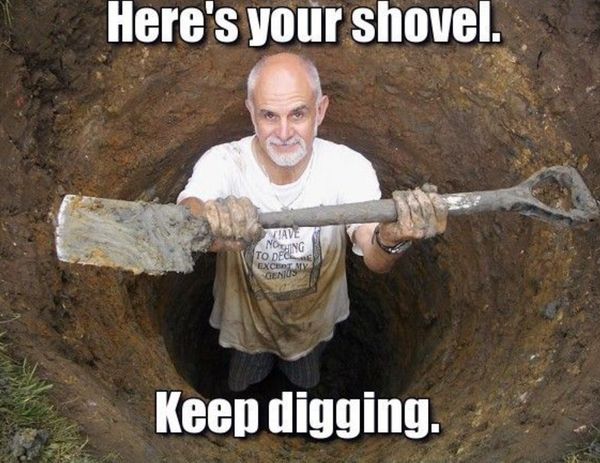 Why does bitcoin waste so much electricity on a mathematical puzzle that solves nothing?

This is an often asked question about Bitcoin and it's not easy to answer. But I'll walk you through a simple analogy that will give you a sense of why Bitcoin performs this "puzzle"...

SPOILER: we're going to end up with a bunch of jurors digging a deep hole! Let's start...

Imagine a jury that is voting on a verdict. But this is a unique jury with unique rules:

You might think these are odd rules for a jury, but the idea is to make the analogy closer to a decentralized computer network because that's where bitcoin runs.

Now here's the problem facing this jury: they want to record their votes in the way that will be most difficult for the corrupt jurors to tamper with or destroy.

If they write down their votes on a piece of paper, or record them on audio or video, the corrupt jurors could easily destroy these.

What if, instead, they cast their vote by digging two holes. One hole for "guilty" another for "not guilty". The deeper hole would represent the majority vote.

Each juror will put all of his or her energy towards helping dig the hole that represents their decision.

Using so much energy to cast a vote may seem horribly inefficient. But it has some unique benefits. First, the jury didn't have to rely on any external help to track the votes. Second, the voting results are difficult tamper with. Third, the vote results are now permanent.

So the basic idea is to make the vote require the voter to exhaust all of his or her energy in a manner that can be recorded. That way the combined energy becomes harder to tamper with.

So that is how the block chain keeps track of the verdict on transactions.

Instead of digging a hole, however, with the block chain we're building a tower of blocks. The honest builders in the block chain are adding blocks of valid transactions.

If a dishonest person wants to tamper with the blocks, he'll have to produce more energy than all the honest block chain participants.